Meeting the Challenge of Youth Unemployment

There have been numerous articles written recently regarding the state of youth and young adult unemployment in Chicago and the impact that it has on local communities, specifically on the south and west sides of the city. 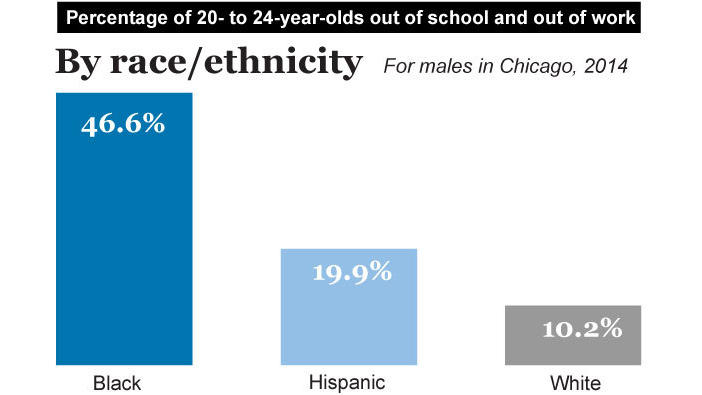 Black males in Chicago are out of work and school at far higher rates than their Hispanic and white peers. (Source: Chicago Tribune)

Chicago is one of the worst urban areas in the country for teen and young adult employment and it continues to experience the devastating effects of violence in low-income communities. The city has failed to adequately partner with local community leaders to promote policies and implement programs that bolster employment opportunities in its low-income and most hard to serve communities.

Ample evidence demonstrates that increasing employment among teens and young adults in low-income communities decreases acts of violence, yet Illinois is failing to prioritize funding to make such initiatives a centerpiece of their violence prevention approach. 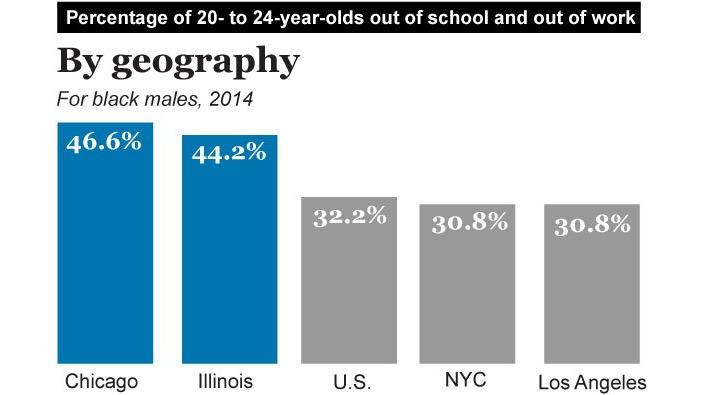 Chicago has a higher proportion of 20-24 year olds out of work and school than the US average and more than other large US cities. (Source: Chicago Tribune)

During the recession President Obama provided funding for job subsidies for the unemployed, the program showed positive benefits for all age groups, yet it was discontinued after only a year. Mayor Rahm Emanuel’s One Summer program provides teens and young adults ages 16-24 (with limited opportunities for 14 and 15 year olds) work opportunities for 20-25 hours a week during the summer.

Proposals have been made to provide funding for job or subsidy programs for the unemployed, but they continually fail to be implemented at the necessary scale at the national, state, and city levels. Steps must be taken to improve the ability of these programs to serve the most in-need Chicagoans and to better meet the needs of local communities.

At a recent hearing hosted by the Cook County Commissioner’s Office “Nothing Stops A Bullet Like A Job” one youth spoke out—he suggested the title holds true in many circumstances for the youth of Chicago. However, he also stated the opportunities and benefits that come with employment are not the only issue—continued divestment in low-income communities and the lack of a state budget create more barriers for youth to find employment.

Community leaders who are working in areas of concentrated unemployment and high levels of violence have called for policies to improve summer job programs. Working with community leaders to improve income eligibility requirements, create in-person applications in addition to online recruitment, and partner with organizations based in targeted communities will help to serve those most at-risk of joblessness, instead of serving those already most likely to succeed. These steps will ensure that employment opportunities reach the most disconnected youth and that they receive the services that they need to thrive.